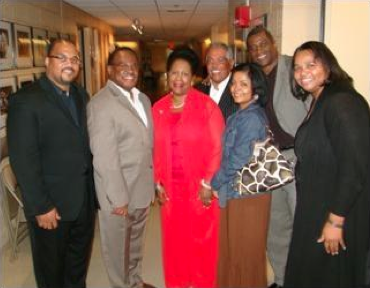 Washington, D.C. — For the second consecutive year, growing numbers of organizations have joined with the United States Senate and the House of Representatives to create the “National Gospel Music Heritage Month” initiative. The dual legislation passed by the House and the Senate designates September 2009 as “Gospel Music Heritage Month,” honoring Gospel music for its valuable and long-standing contributions to American culture.

Over the weekend, the John K. Kennedy Center for the Performing Arts in Washington, D.C., opened its doors to recognize Gospel Music Heritage Month, with the performance of Stellar Award winner and Verity records recording artist Byron Cage. With a full band and members from Judah Gathering of Ebenezer AME choir in Ft. Washington, MD singing back up, Cage gave an energetic and uplifting performance with back to back hits, cuts from his soon to be Fall release CD and closing with “The Presence of the Lord is Here.”

Making a special appearance was Congresswoman Sheila Jackson Lee. In her opening remarks she said,

“Gospel music has been woven into the fabric of American Society for Centuries, deeply affecting hundreds of generations. From Rock & Roll, Country, The Blues, R &B and even Hip-Hop, Gospel’s musical roots can be heard throughout many musical genres that we love today. Not only has Gospel music entertained the masses but its spiritual roots has spread the Gospel of Jesus Christ to millions giving it the unique ability to minister to souls around the world.”

“It is very important that we recognize and celebrate the vital role Gospel music has played in music history and also in contemporary times. On July 31, 2009, the United States House of Representatives passed House Joint Resolution 12, designating September 2009 as “Gospel Music Heritage Month.”

“I would like to acknowledge the Kennedy Center as the nation’s busiest performing Arts Center, hosting approximately 3,000 events each year for audiences numbering more than 2 million. Since 1971, we have been bringing the world to Washington, D.C. with magnificent performances of music, dance, theater, and now OUR NATIONAL GOSPEL MUSIC HERITAGE MONTH CELEBRATION. 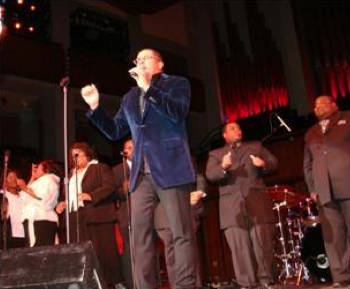 The influence of Gospel music can be found in all forms of secular music, from Rock & Roll, Country,

Soul, R & B, and many other styles. Let us not forget that the legacy of Gospel music includes some of the most memorable voices and pioneers in American History, such as Thomas Dorsey, Mahalia Jackson, James Vaughan, Roberta Martin, and many more. Gospel music has also paved the way for legendary recording artists such as Elvis Presley, Marvin Gaye, Aretha Franklin, Buddy Holly, Whitney Houston, Ray Charles, Dolly Parton, Mariah Carey, Kirk Franklin, Yolanda Adams just to name a few.

After the performance, Congresswoman Sheila Jackson Lee met with Jazzy Jordan, Albert Tucker, Gospel Music Complex, Sheilah Belle, The Belle Report, Carl Davis, Lillian Theresa Taylor and Ernest Walker. She discussed the importance of the Gospel Music Heritage Month and said she wanted Gospel Music to be recognized as an American Art form. “Gospel music is here! It tells the stories of lives and sometimes we have a habit of throwing away our history.”

Hoping to help preserve the history of Gospel music is Albert Tucker, as he leads the way with the Gospel Complex for Education and Preservation in Lauderhill, Florida. He said, “We are still moving forward with our capital campaign efforts.” After hearing what Mr. Tucker had to say, Congresswoman Sheila Jackson Lee, promised to take a closer look at the Gospel Complex as a valuable resource for Gospel music, and to utilize The Belle Report as a news outlet to circulate updates about Gospel Music Heritage month and other on going efforts.

Throughout the rest of the month, sponsors of the initiative – including the Gospel Music Association, the Gospel Music Workshop of America, and The Stellar Awards – are encouraging Americans to attend concerts and events, watch and listen to gospel music, and learn and read about Gospel music, among other activities.

Bottom line, if you love Gospel Music, we ask that you support “National Gospel Music Heritage Month.” Join Gospel Music Channel, Congresswoman Sheila Jackson Lee, Jazzy Jordan, Albert Tucker, Sheilah Belle, The Belle Report, Carl Davis and so many others as we move forward with this initiative to recognize and celebrate the vital role Gospel music has played and continues to play in our Gospel music history.

In: Latest News
By: admin
Comments: 0
‘Evolution of Gospel’ concert uplifts and inspires as it celebrates gospel music »

Recent Blog Posts
Upcoming Events
There are no upcoming events at this time.